Bookshops of the rich and famous

I was lucky enough to be chosen last year as one of the Kobo Booksellers NZ Scholars, to attend the WI11 conference. As if the excitement about attending the American Booksellers Association Wi11 (Winter Institute booksellers conference) in Denver, Colorado as part of the scholarship wasn’t enough, I couldn’t believe my luck when it was announced that for the bookshop placement component of the scholarship, I would be placed for one week at the legendary West Hollywood bookshop Book Soup.

The American Booksellers Association support independent booksellers to grow and succeed, and offer advocacy in healthcare, housing, free expression and small business issues. The Winter Institute, held at the Sheraton Denver Downtown Hotel was a brilliantly run and organised event with relevant and interesting sessions. 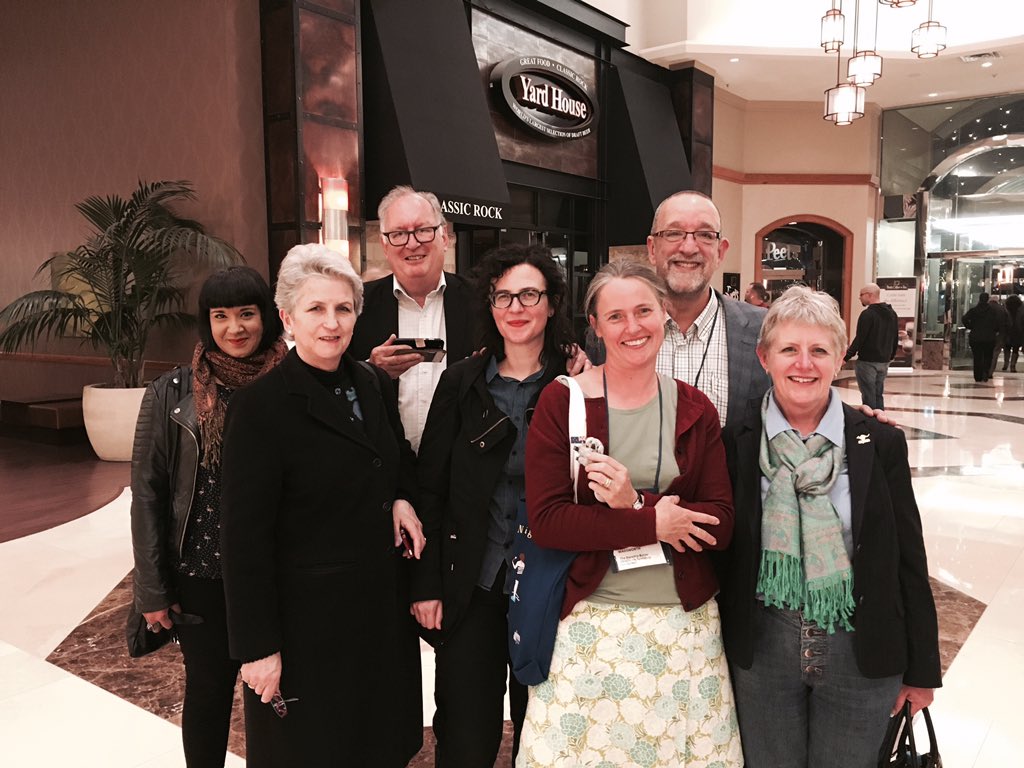 Highlights of the Winter Institute Conference
The Economics of Publishing was a detailed financial session where publishers talked us through the financial realities of publishing. George Gibson from Bloomsbury USA observed that, “publishers are serial gamblers,” and that “you cannot print your way to profitability.”

Education for International Booksellers: Trends in US Bookselling was an insightful panel discussion led by a group of experienced and innovative American booksellers who have or are successfully adapting their business to meet the shifting challenges and demands of the current indie retail landscape. Many shops have been sold to new owners, Tattered Cover in Denver, for example and the trade is welcoming to young, new owners and managers. (Image below from Kiran Dass, of a recommendation table at Book Soup) 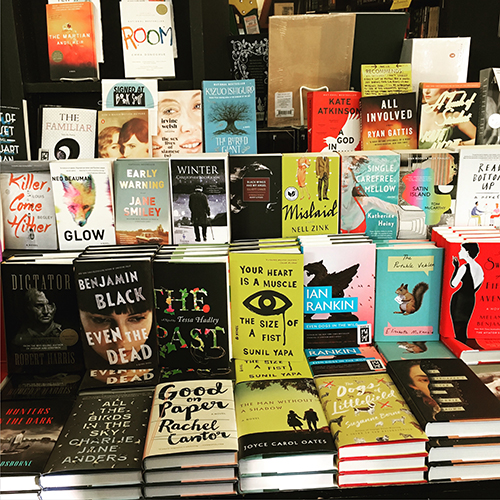 Bradley Graham from Politics and Prose Bookstore in Washington DC said that though the American book trade is “generally in good shape,” as the cost of real estate goes up so does the pressure on booksellers. Another challenge that was acknowledged is the different minimum wage laws, which vary across different states. Indeed, many of the American booksellers I met had other jobs in addition to their bookshop work.

There is a strong focus on the localism movement, and Holly Weinkauf from the Red Balloon Bookshop said that the “buy local” movement keeps getting stronger, particularly in Boulder Colorado, Salt Lake City and Washington DC. “Don’t underestimate it,” Chuck Robinson from Village Books in Bellingham told the audience.

The speakers made the observation that while the 1990s saw a trend for specialty stores such as mystery, cookery and travel bookshops, these aren’t successful anymore in the USA. That is, apart from specialised children’s bookshops, which are going gangbusters. Bradley also said there is an expectation for bookshops to have a coffee component and for non-book related items such as candles to bring in additional cashflow.

This was a real trend I noticed in all of the bookshops we visited in Denver on the regional bookshop tour we went on, but not so much for the many amazing bookshops I visited in Los Angeles (apart from Vroman’s which has AN ENTIRE FLOOR dedicated to non-book related items from salad bowls to vases!) New York and San Francisco.

I also attended an inspiring and brilliant session about the US version of Bookshop Day and came away with some great ideas for our own version of the event.

I visited bookshops in San Francisco and New York, as well as LA, and the bookshops that stood out to me as exceptional, were McNally Jackson Books and Three Lives and Company, both in New York. I spoke to booksellers from all over the world both at conference and at all of the bookshops I visited in during my five weeks away, and this was actually one of the most valuable and interesting parts of the scholarship.

Book Soup - A shop of 'spunk and personality' 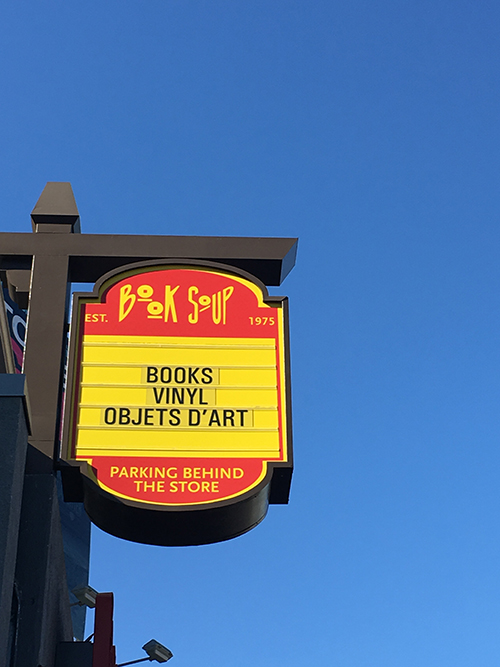 Owned by Vroman’s, Book Soup (sign photo by Kiran) is a vital literary and cultural fixture of the Sunset Strip. A bookshop of such spunk and personality, Book Soup’s spirit resonated with me hugely before I even got there. After Iron Lady Maggie Thatcher banned Spycatcher - Peter Wright’s candid 1987 biography of a senior intelligence officer - Book Soup placed an ad in Private Eye magazine declaring “Banned in Britain. Available in America.” The shop went on to sell 3,000 copies of the book in the next three weeks.

When a fatwa was placed against Salman Rushdie following the publication of his sensational The Satanic Verses, Book Soup founder Glenn Goldman wrote a ransom note to the Los Angeles Times declaring that freedom of speech was being held hostage, which impressed Rupert Murdoch enough to write Goldman a letter of admiration.

As soon as I walked into Book Soup, I felt right at home. The staff and customers alike were intelligent, warm, friendly and open and, in my element, I swept straight onto the shop floor to handsell hardback copies of Clarice Lispector and Lucia Berlin collections (The Complete Stories and A Manual for Cleaning Women respectively) to local punters.

On my first day, Vroman’s President/CEO Allison Hill and Book Soup store manager Marion Bright (pictured on the right above, with some of her staff, taken by Kiran) gave me an extensive tour of the shop and introduced me to the staff. Everybody was so generous with their time. After taking me out for lunch, Marion gave me a micro-tour of their little pocket of Sunset Boulevard, which included scoping out the world famous rock & roll clubs Whiskey A Go-Go, the Viper Room and the Roxy.

Apparently Elton John – a regular Book Soup customer – popped into the shop that day but I was upstairs in a session with social media whizz Dan. Famed booksellers to the “great and infamous, serving readers, writers, artists, rock & rollers, and celebrities since 1975,” Book Soup has attracted regular visits from book lovers David Bowie, Patti Smith, Madonna and Joni Mitchell to name a very few. (ed's note: Look, a photo of Elton coming out of Book Soup - click through to find his bodyguards with a box of books shortly afterwards!) 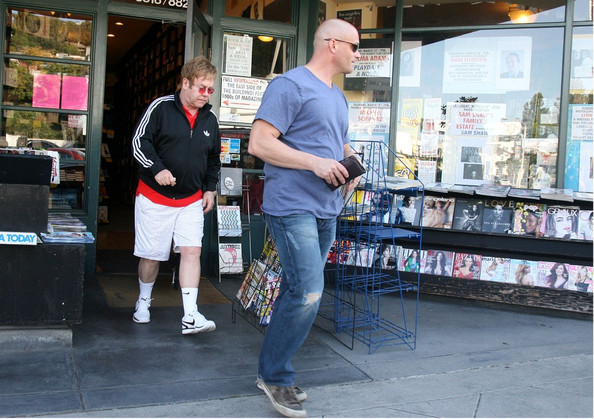 Marion and Allison were generous, warm and wonderful hosts who answered all of my questions and asked just as many themselves. They showed and talked me though all of their bookshop systems and I ended with a very strong feel for the culture of the bookshop. Book Soup appears to be a beautifully and efficiently run bookshop with high staff morale. My fellow Kobo Scholar Helen Wadsworth and I sat in on the Vroman’s/Book Soup meeting which was held at Vroman’s in Pasadena, where sales targets, budgets, news and events were discussed so all staff were clued up. Book Soup holds a jawdropping 300+ events a year, in a fairly limited shop floor space.

I asked Marion what she looks for in a bookseller and she said that education, a sense of humour and a strong work ethic are essential. Helen and I sat in on a buying session with Vroman/Book Soup’s extraordinary head buyer Sherri Gallentine with a Simon & Schuster rep. It was fascinating to observe order quantities and book selections, which I felt were in line with Unity’s style and quantities. (below: image of Kiran's recommendation on A Little Life)

I can't express enough my gratitude to Kobo, Booksellers NZ, Allison and Marion at Book Soup and my employers at Unity Books Auckland for this amazing opportunity. In terms of professional and personal development, it was such a worthwhile, enriching and rewarding experience. I have a whole notebook of observations and ideas to apply to my bookselling practice in New Zealand. If you want to know any more about my experiences - you know where to find me.