During the past couple of years in New Zealand and throughout the world, there has been a rise in the number of children experiencing anxiety at a young age.  Over 34% of children and adolescents referred for help with their mental health in 2018 were under 12. Authors and publishers have begun to respond to this by creating publications that aid parents and children to help understand their emotions in a more active and mindful way.

While the most recent of these titles to hit the bestsellers list is Aroha’s Way, by Craig Phillips, this is not the first nor the last book that deals with child mental health that has taken off. The Read asked some children’s booksellers whether they thought there was a trend emerging for mindfulness in kids’ books – the answer was a resounding ‘yes.’ Thank you to the team at The Children’s Bookshop, Katie from Time Out Bookstore, Charlotte from The Children’s Room at UBS Otago, and Briar Lawry from Little Unity for their input to this article.

A strengthening trend
Kids are as subject to big emotions as any adult, but once upon a time periods of strong emotion have been seen as phases to grow out of, rather than realities to grow into and learn to cope with. Schools and parents alike are becoming aware of this, and looking for resources to help their students and children grow up to be resilient and kind.

Charlotte McKay from University Bookshop Otago (UBS Otago) says, ‘I recently put together a list of books for a school for an entire term unit they were running schoolwide around resilience, conflict and honesty. I put another list for a different school together of books about honesty, fairness and responsibility.’

The Children’s Bookshop agrees, saying, ‘We see a lot of schools looking for texts to help kids who may be experiencing anxiety issues or emotional disruption of some kind and who want materials to both normalise and encourage mindfulness in the social environment.’

‘We’ve also had people looking for stories to help kids process emotional issues, making connections with the experiences of the characters and their own experiences, or the experiences of others in their lives. Rose Lagercrantz’s Dani series from Gecko Press has been very popular with 5-7 year olds as the main character deals with large issues (the death of her mother) as well as smaller issues (mean kids at school) in a very relatable way. Hazel and the Snails (Annual Ink) also deals with emotional trauma around the sickness and death of Hazel’s father.’

Briar Lawry from Little Unity notes, ‘There has been a simultaneous increase in both enquiries from customers and options from publishers as this dialogue expands into the kids book space, and both business and consumers have responded promptly. 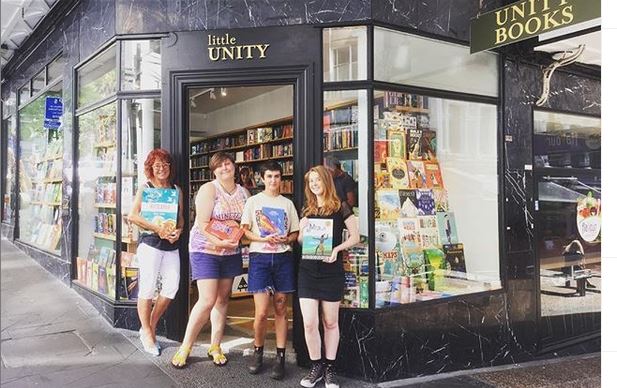 ‘The section of picture books that we carry that is variously described as the ‘challenges, empowerment, families, issues…’ section has grown in the 10 months little Unity has been open. It has gone from a few titles pertaining to bereavement and new siblings to including a variety of options to do with mindfulness, kindness and anxiety.’

Mindfulness for kids in schools
When you do a little bit of research around philosophy, mindfulness and resilience for children, you can see a number of solo practitioners doing very good work in this area. In Waikato, Rachel MacAllister runs her programme Inspire Mindfulness at Cambridge Primary School, inspired by her time as a teacher and practising mindfulness herself.

In an article in Stuff, MacAllister notes that she thinks that mindfulness ought to be an explicit part of the New Zealand Curriculum, saying, ‘We look at how mindfulness helps the prefrontal cortex, which is the part of the brain we use for concentration, decision making, having compassion, problem solving etc.’

‘I teach the children how neural pathways are created and how new pathways can be created, therefore creating healthier thought processes.’

Meanwhile, in Wellington, Jase Te Patu runs meditation classes for children, M3 Mindfulness for Children, which integrates storytelling and yoga meditation. He says, ‘You can't just say 'sit down, be quiet, be mindful',’he said, ‘My way of engaging them - and there are different techniques - is to reel them in with a story, get them in the present.’

Kristina Cavit is in Auckland running a similar programme, The Kindness Institute, which has seen her go into schools and communities around Auckland to teach yoga and meditation to at-risk youth. She supports MacAllister in noting that in a dream world, there would be classes on meditation as part of the curriculum, ‘How to handle stress, conflict, how to have difficult conversations. How to forgive yourself, how to forgive others… a mindfulness stress-management programme in every school.’

And author Avril MacDonald runs a programme online which aims to achieve similar things, based on the lessons taught in her Brave book series, which she began writing 9 years ago. A story in Stuff says, ‘She uses her stories as an anchor for a free wellbeing programme too, which she estimates is used by about 70,000 students in 250 schools across 10 countries - roughly 100 of those schools are here in New Zealand.’

This isn’t just a case of the latest buzzword
Lawry from Little Unity notes, ‘I think as we are driving towards a more inclusive, nurturing, progressive world, it only makes sense that we are examining how issues like anxiety affect tamariki, and supporting means of creating healthy brainspace, like mindfulness.’

UBS Otago’s McKay puts some of the increase in demand for titles down to the New Zealand Curriculum, which focus on Key Competencies, and the ability for children to acquire new skills and manage themselves in a way that will help them become life-long learners and therefore be able to adapt to new environments. She adds, ‘This is partly to address the issue of the changing job market and the fact that this generation will be doing jobs that don’t even exist yet, so resilience, adaptability and other self-management skills are key to success in this unknown future.’

The Children’s Bookshop says, ‘Adult colouring books have certainly made mindfulness a household word, plus the emphasis from mental health professionals with troubled youth and young adults.

‘These books have also become more in demand due to the Christchurch and Kaikōura earthquakes and the Christchurch terror attack, growing awareness among adults that they need to help coach their kids and students through the aftermath of these sorts of events, and a growing acceptance of mental health as something that needs to be discussed.’

Children’s book website The Sapling recently ran a list of books focused on climate change anxiety, something which is rising for both children and adults. Writer of this list Anissa Ljanta notes in the introduction, ‘Hope is found in resilience, being mindful and in being able to imagine life in a changed world.’ And one of their very first articles was all about how stories can help children with anxiety.

Another aspect driving this trend, notes Katie from Time Out Bookstore, is an increased focus in the parenting and educational worlds on emotional literacy in childhood. ‘Mindfulness and meditation are also being addressed more fully in schools, particularly at primary and intermediate levels. Yoga and meditation are often a part of physical education, and children are being encouraged to articulate their feelings.’

Books that people are requesting
Each bookshop we spoke to had quite a different list of titles that were being requested by their community, with two NZ titles in common for a few stores – Aroha’s Way by Craig Phillips (Wildling Books), a picture book for younger children, and The Book of Knowing by Gwendoline Smith, which is aimed more at teens.

Other popular books targeted at younger children include Ruby’s Worry, by Tom Percival (Bloomsbury); Scaredy Book, by Devon Sillett (EK Books); by clinical psychologist  and mother of three Lynn Jenkins there is Lessons of an LAC (Little Anxious Creature), Brave, Perfect Petunias, and Grey-Glasses-itis (EK Books), Calm with the Very Hungry Caterpillar (Penguin Random House); In My Heart: A Book of Feelings, by Jo Witek (Thames & Hudson); Have you Filled a Bucket Today? A Guide to Daily Happiness for Kids (Bucket Filosophy) and Tomorrow I’ll be Brave, by Jessica Hische (Penguin Random House).

For slightly older kids, You’re Crushing It by Youtuber Lex Croucher (Bloomsbury); What to Do When You Worry Too Much: A Kid’s Guide to Overcoming Anxiety, by Dawn Huebner (Magination Press); Hey Warrior, by Karen Young (Little Steps Publishing) and the aforementioned Dani series from Gecko Press.

UBS Otago have also noticed a demand for kids’ gratitude-type journals. McKay says, ‘I’ve noticed an interest mostly from parents rather than children themselves. The parents are often buying for children in the early teenage group (age 10-14).

At Time Out, they have gratitude journal options, but Katie says, ‘We have had some requests, but people are also grabbing Typo notebooks and adapting adult gratitude practices for their children.’

Lawry at Little Unity says, ‘We don’t carry a huge amount of journals and notebook, but we stock a few titles, and I feel like we see the most movement on the more pumped-up inspirational end of things (I am a Rebel Girl, The You Are Awesome Journal), rather than the super introspective material that is out there.’

It seems clear that this trend of books that encourage our children to think harder about their own minds and how to manage their emotions is not slowing down. The triggers that have seen this become more popular are also not going away: so well done publishers, and keep going! Let’s see some more innovative ways of helping kids think about their emotions and those of people around them.