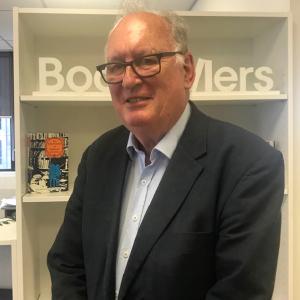 Lincoln Gould is retiring as CEO of Booksellers NZ at the end of October, after 10 years at the helm.

Announcing the retirement, Chair of Booksellers NZ, Juliet Blyth  says 'The Association has been immensely fortunate to have had Lincoln as our CEO these last 10 years.'

‘Lincoln has been a true champion for our members and for the wider book industry. Notably Lincoln was a key driver, in lobbying successive governments to implement the charging of GST on international online purchases, and this will be in place from October 1 this year.

‘Due to the strong relationships he forged with his international counterparts, particularly the American, Australian and British Booksellers Associations as a founding member of the English Language Booksellers Association, Lincoln has been extremely successful in bringing the world to NZ booksellers with many new initiatives.

‘These include  NZ Bookshop Day - celebrating independent booksellers and their communities, and the establishment of the highly coveted Winter Institute Scholarship, allowing kiwi booksellers to attend the ABA’s richly educational Winter Institute Conference, and gain work experience in American bookshops.

‘Lincoln’s achievements are many, and tough as it will be to see Lincoln go, with membership numbers on the rise and Booksellers NZ safely ensconced in their new premises across from Book House in Boulcott St, the Association is well positioned to engage in a new future. Lincoln came into Booksellers NZ from a background in change management and leaves with a demonstrable passion for the industry in the form of Messines Bookshop, his own bookshop in Featherston. Once again, the magic of bookselling does its thing’.

'Bookselling in New Zealand has seen great change in the past 10 years,’ says Lincoln, ‘and I have been fortunate to have been able to contribute to such an important  part of the cultural fabric of the country.

'The financial crisis of 2009, the year I started, also saw the beginning of the e-book phenomena, which some predicted would be the end of printed books.  It was also the time when Amazon was attacking bricks and mortar bookshops around the world with cut priced on-line selling.  However, New Zealand booksellers rose to the challenge, with our agreement with Kobo offering the opportunity for member bookshops to sell e-readers and also consolidating their positions as important social and cultural hubs within their communities. Booksellers NZ and our members also quickly utilised the new tools of social media to promote and sell books online. The e-market has now plateaued, new bookshops are opening in communities across the country and real-book sales are increasing.'

Lincoln will see through the major projects for the year and the October date for retirement will coincide with the introduction of the requirement for offshore online retailer to collect GST on sales into New Zealand. The Booksellers NZ Board has done some preliminary work on a replacement role and will shortly engage the services of a recruitment specialist. The role will also be also advertised through The Read in the coming weeks. The Board aims to select a new head for the Association by the end of August.